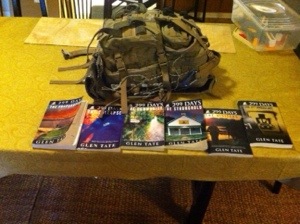 Picture taken by me.

What can I say about the 299 Days book series wrote by Glenn Tate? It gives a great and interesting look to what I would call a soft collapse.

A soft collapse is a when only parts of a society crumble, not the whole. It is this reason why I feel it would be easier for something like 299 Days to actually happen then a full collapse.

The first story, The Preparation, starts with a interesting look at Grant’s(main character) life. I will not give spoliation sense it was that good, in my opinion.

The middle of the story is when it really gets good. Grant at this time period has become a lawyer for a local government in Washington State. He has left his roots and has become a suburban slug. He feels that his life is perfect just the way it is. Some time later, Grant gets information that re-awakens him.

He starts listening to preparedness podcasts, buying food, water, and even a gun. Since he has not done things like this in a long time, Grant feels like it is socially awkward to do things like this.

Later on, Grant joins a shooting team where he improves his shooting skills. latter on; he learns that his shooting friends don’t mind that he is a prepper. They learn to trust each other and gain skills that would help them during a emergency.

At the end of book 1, the collapse is starting. Social government starts to fall. People start to become aware of events. People even start to riot which pushes the governments to react.

The rest of the series gives you at different looks at the collapse.  Book two is set at the beginning. Book four is in the middle. Book six is at the beginning of the rebuilding.

I have only ready up to book six so far and I have loved every second of it. I can not wait until I can get my hands on the last four books in the series.

299 Days did not pull any punches and had a great overall plot with survival information mixed in. These factors pretty much forced me to give this great series a high score.